Benjamin is still in the NICU so I've been working on getting his room ready for him so it is all set when he is finally able to come home. One of the projects I made for his room is this mobile. I got inspired from some ideas on pinterest using yarn balls. 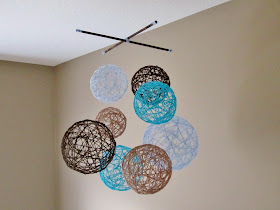 I took a bit of the fabric from his bedding set to the store and matched it to the colours of yarn available in the store and lucked out with some perfect matches. I made this recipe for paper mache paste, dipped the yarn in it and wrapped it around a balloon (I used punch-balloons instead of regular balloons so my yarn balls would be more round). Let me tell you that this is not as simple as it sounds, well up until this step is easy, but it's the drying process that is not. I hung my balloons from the shower curtain rod but as they dried many of the balloons shrunk in size before the yarn dried so the yarn balls turned into a yarn mess instead. As a result, I only had success with about 1/3 of the yarn balls looking right. Originally, I had wanted a few more balls on there but it was just too much work for so few to turn out. I still love the way it looks though! 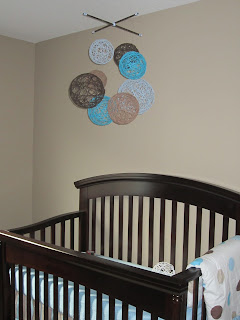 I bought a dowel from the hardware store and stained it with some leftover stain that we had from when our house was built. I used some Stampin Up! ribbon that matched the light blue and used it and hot glue to hold the dowels together. The ribbon at the ends of the dowels were to hold the clear line in place that hangs the whole mobile from the ceiling.

Thanks for visiting and sharing your comments - I always love reading them!