This picture does not do this project justice at all. 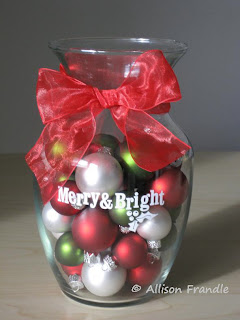 Grant and I had extra ornaments leftover after decorating our Christmas tree because there were SO many deals on ornaments over the weekend) and I found this extra vase we had when we were tidying up. I thought it would be really cute to fill the vase with the extra ornaments and tie a ribbon around it.

It looked really nice just like that but it seemed like something was missing. Since I had the rubons out from creating the glitter ornaments and snowflake candles, I thought I would try to put one on the vase and see how that looks. Grant picked out the Merry & Bright sentiment from the SU Season of Cheer rubons and we think it looks amazing. We've got it sitting as a table centerpiece but it could go just about anywhere!
Posted by Allison at 6:05 AM

This is totally gorgeous! Why didn't I think of that?! ;)

What a great idea and a beautiful outcome! I love it!