You're How Old CASE

I've been slowly working on CASEing some cards I've pinned on pinterest. If you've seen my papercrafting inspiration board, you know I have a lot to work with!

I wasn't initially very fond of this stamp set, but it very quickly grew on me as I saw others using it. This card is a CASE of Mary's card here. 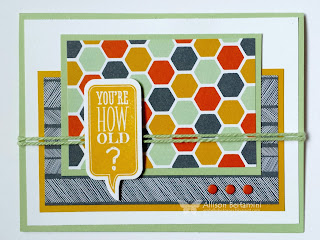 We take Ben to the monthly kids' workshops at Home Depot and he always really enjoys them and he loves construction vehicles so we thought we would combine them for his 3rd birthday party. 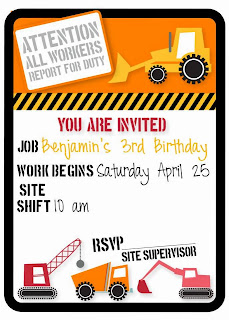 The invitations and decor were made using the Stampin Up MDS set Bday Under Construction and I used a ton of ideas from pinterest (check out my birthday party board here).

I updated my usual birthday balloon wreath with a party zone sign. 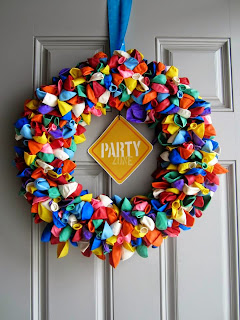 Pilon birthday banner beside the table.

What's a birthday party without balloons?! Of course in construction colours! 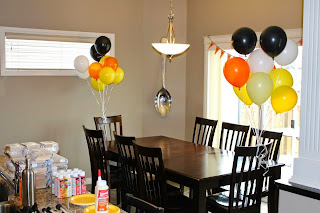 Banner over the fireplace where gifts were placed. 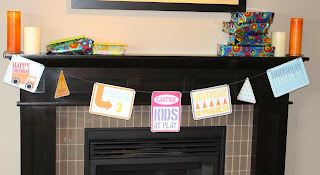 Set up just like at the Home Depot Kids' Workshops. Our location doesn't host parties but were generous enough to set us up with aprons and bug house and bookend kits for all of the kids as well as lending us hammers for the kids to use free of charge! There are tons of more pictures of the kids working on their projects, but I didn't want to post pictures of other people but had to show just one to give you the idea! 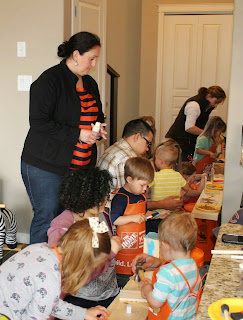 This cake is what was the basis for the whole theme. Benjamin saw this cake over a month before his birthday when we went to Dairy Queen and asked for it repeatedly for his birthday! It was the only thing that he asked for so of course he got it! 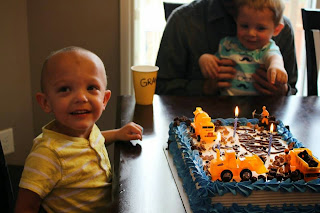 Benjamin turned 2 last year and we had a Very Hungry Caterpillar themed birthday party. I was inspired by lots on pinterest (check out my birthday party board here) and ended up with this!

I used a Very Hungry Caterpillar download and the Stampin Up MDS program to create the invitations as well as a birthday banner (that didn't photograph well at all)! 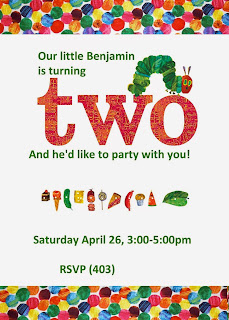 I was also planning a caterpillar outside in helium balloons leading towards the door but considering it snowed, that idea got eliminated and settled for this instead in the entranceway! 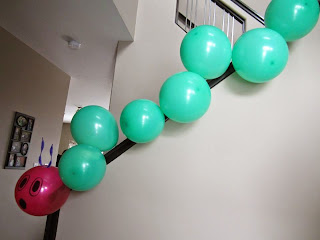 Little chinese lanterns set up as a caterpillar in a window by the table. 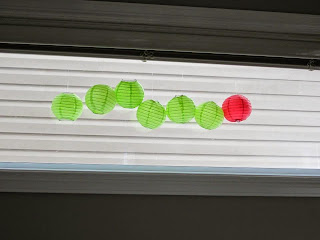 The food display. I made little food tags using the downloads as well and bought the majority of the food that the Very Hungry Caterpillar eats throughout the story for the guests to eat before cake. 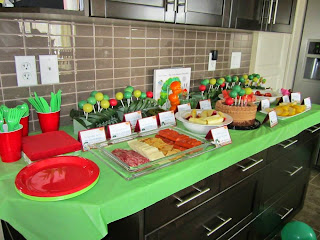 I made the "caterpillars" out of cake pops and put them into foam flower displays covered in fake leaves. 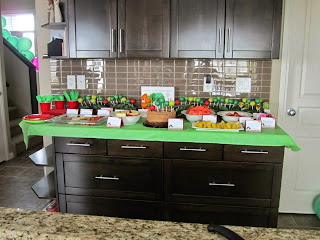 The goodie bag for the party was a bug house as well as home made play dough in green and red so each guest could make their own Very Hungry Caterpillar! 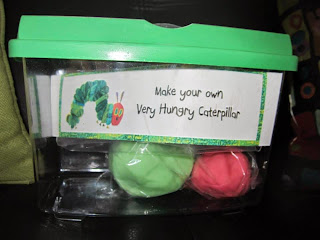 I have recently sacrificed my craft room and converted it into a playroom for Benjamin. Ben loves to colour already and I wanted to find a fun way to display his art that would be quick and easy to change out with each new masterpiece.

I looked all over pinterest and found many different ideas, but wasn't a huge fan of any of them until I saw this one for DIY Magnetic Frame Gallery. This is my take on it. You can even see Ben's very first piece of artwork on it! 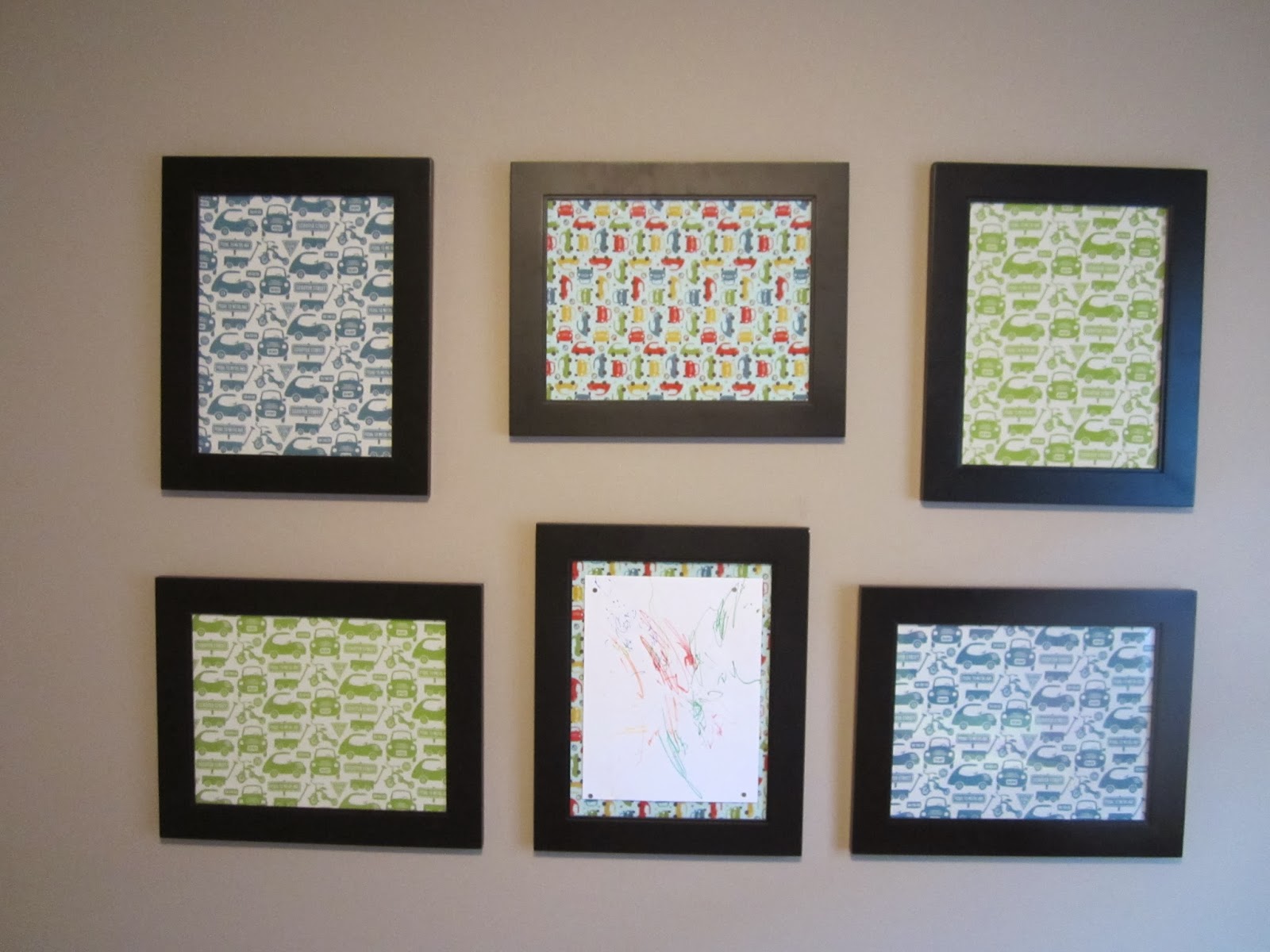 This project was super easy. I picked out frames that I liked that were bigger than an 8.5x11" piece of paper so that his art would have a border to it between it and the frame. I am lucky enough to have a plumber for a dad, so I had him cut me some galvanized steel sheet metal just smaller than the frame so it wouldn't have any sharp edges. Then I bought some fabric I liked (in this case cars because his playroom is covered in them) and wrapped it around the sheet metal and stuck it all in the frame. I wanted cute fabric so the frames would still look nice when there was no art on them. Then once on the wall, changing his artwork just requires moving of a magnet!

I love the way it turned out and Ben does too, it got a "WOW" when he saw it!
Posted by Allison at 3:39 PM 0 comments

I can't say this was a quick or cheap project, but I LOVE the way that it turned out! Plus, we plan to get many years of use out of it considering Ben is only 19 months. 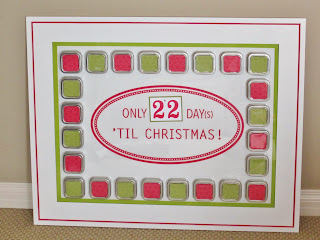 I had purchased the vinyl from Stampin Up! probably about 4 or 5 years ago but only now that I have Ben did I bother putting it all together. I bought a large frame from Michael's and put a white poster board inside of it. Using double sided tape, I adhered the red and green ribbons along the two borders of the frame (this wasn't initially part of my plan, but it developed as I felt the outside part looked too white). The containers are just little containers from Michaels from the wedding favours section and I put a piece of Stampin Up paper inside each and adhered the tins with glue dots. The numbers are on green and white paper and attached with a magnet so they can easily be switched out everyday - it's a bit early for Ben to do so (he'd probably just eat the magnet) so it's currently being kept out of his reach!
Posted by Allison at 2:27 PM 0 comments

I've seen these wood growth charts all over pinterest and at baby expos, but I never like the colours of the ones you can purchase, and they wouldn't go with the wood/decor in our house, so I decided to make my own. 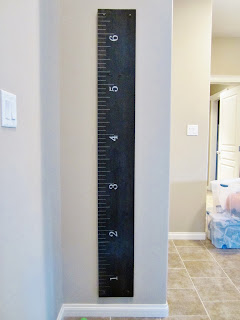 I bought a piece of 10" x 1" x 6' piece of knotty pine at our local hardware store. I stained it with some of the leftover stain that we had from when our house was built so that the colour wood match the other wood in our house. Once that dried I used a ruler, measuring tape, and silver sharpie to make all of the lines. I then printed out the numbers on my computer using a font I liked, traced over it onto the wood so that it would indent the wood and then coloured it in using my sharpie. I let the sharpie dry for a few days and then applied a coat of polyurethane (be careful which product you use or you may be starting over after this step like I had to the first time).

Once it was all done, Grant and I hung it where I wanted it and we plan to start marking Ben's growth yearly on his birthday. I have his measurement from his first birthday so I can add that one to it too!
Posted by Allison at 7:12 PM 0 comments

I've seen this idea all over pinterest and knew I had to make one for Benjamin. This whole project was really cheap to create. I bought the cozy coupe at a garage sale and then just had to buy some black spray paint (I think one can was enough) and the batman decal (which I purchased on ebay at Doctor Decal). 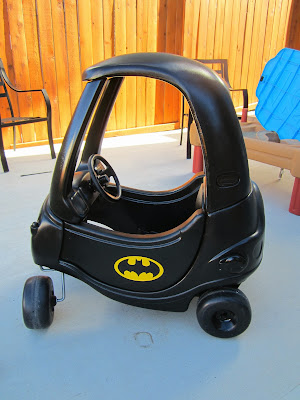 Ben is still too little to use this by himself, but he sure loves sitting in it while we push him around!
Posted by Allison at 3:52 PM 2 comments