I went to a co-workers baby shower two nights ago and realized last minute that I didn't have a baby boy card to use. So I created this card about an hour before I had to leave (which is why the picture isn't the best because I had to take it when it was dark out). 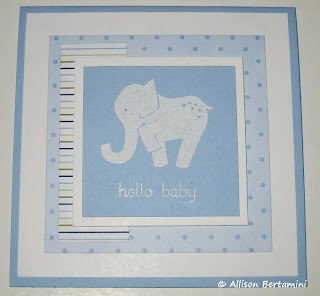 I was inspired by the wild about you card that I created some time ago because it's such a simple but beautiful layout. The elephant and sentiment were both stamped in versamark ink and heat embossesd in white embossing powder. They were aligned using my stamp-a-ma-jig!

I'm sharing this over a month late, but better late than never. I love the way this card turned out. It's definitely one of my favourites but took a lot of time to create. 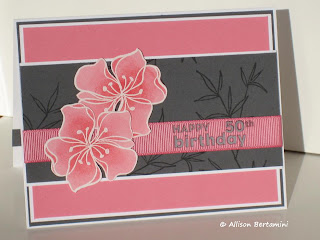 I love the look of regal rose and basic gray together so I decided they would be my main colours. I stamped the image several times in versamark ink to create the background on the gray paper. It took me a long time to figure out what I wanted to do for a sentiment because I didn't want it to be on the gray paper but I wanted it to be in the center. Looking through my supplies I found the So Cool rubons which have parts to cut and rub together to create the sentiment! It looks a bit fuzzy in the picture but it actually worked out awesome on the ribbon!

To create the great shading effect on the flowers, I stamped the Embrace Life flower in Versamark on pretty in pink paper and heat embossed it in white, then cut it out with my paper snips. Then I took my sponge dauber and sponged on some regal rose starting in the center and working outwards. After that I used my blender pens in regal rose ink to shade in overlapping petal areas. Finally, I used my white uniglo pen to colour in the circle parts at the center (the anther of the flower). You can't see from the picture but there is also another flower inside of the card.

P.S. I'm hoping to get some photos of the scrapbook we made her over the next few days to share too!
Posted by Allison at 1:30 PM 2 comments

Stampin' Up! is gearing up for Christmas and offering some amazing products at 30-50% off and bundling up some great coordinating products for discounted prices. Hurry if you are interested as this promotion only runs November 23-30! There are tons of items on this promotion so instead of listing them here follow this link to the Stampin' Up website! Remember when you are looking there is a "regular price" and "preferred price." The regular price is what you get if you order the product online through the Stampin' Up! website. To get the preferred price, email me with your order! Remember too, that if you shop with me and spend $100 or more you will get 10% off for the months of November and December!
Posted by Allison at 1:15 PM 0 comments

Last of the Halloween Treats!

I know I'm so behind on posting but here are the last of the Halloween treats I made this year. 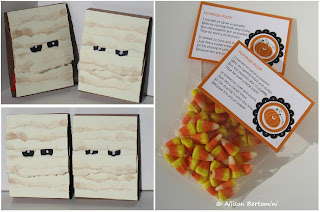 I saw these cute little kit kat holders and had to give the mummy one a try. The tutorials are so clear and so easy to follow. I love the way they turned out and they are so quick to make! I did change a few things: I eliminated some of the layering on the eyes and instead just coloured circles with my white uniglo pen on black 1/2" circles. I also added layers of vanilla above and below so the eyes were a little more hidden! Inside, I used the word label punch instead of the modern label punch - I just punched it twice close together to make the opening big enough to fit the kit kat. You can see in the top picture, I put them at an angle so you could see kit kat inside. If you pop over there to the tutorial check out all of the awesome tutorials Angie has down the side of her blog - they are fantastic!

I saw that cute little pumpkin poop story on Kerry's paper crafting blog and just had to give it a try. I don't know who originally had it but that is the one I saw. It was again super quick and easy to make and could work with so many different Halloween candies! Again, I used Marni's RGB values to create the title of the saying in pumpkin pie so it would coordinate properly.

I know they are late but here's a few Halloween treats that I made. Grant's school this year went for a healthy Halloween theme so instead of giving the kids candy, we gave them Halloween pencils and play-doh. I had extra pixie stix from other projects left in the house so I added a few in for these images but we didn't give them to the kids! 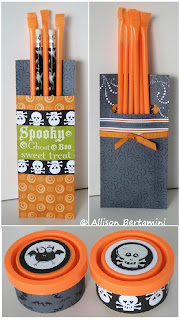 The top left image, is a piece of 12" x 2 1/4" folded up and closed at the sides with red sticky tape so they would be strong enough to not open once the pencils were inserted.

The top right image was made using a 12" x 3" paper. I used my word window punch to create an opening to hold the pixie stix then used sticky tape to adhere the open 3 sides together.

Finally, I wrapped designer paper around the play doh and then adhered the stamped images to the top of the container.

In honour of the promotion I shared with you yesterday (you can read it here), I thought I would share a Christmas arrangment that I made using the Decor Elements line. 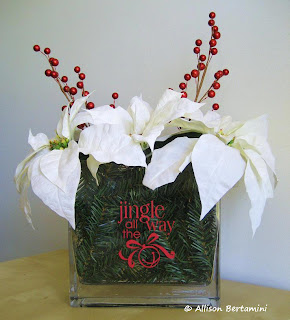 This was so simple to make and looks great! I purchased the vase and flowers at Michael's using coupons so the whole arrangement cost less than $30 to make. This was my first use of the Decor Elements line (despite buying several of them) and it was so simple! This is the small real red "jingle all the way" (item 114707) and it costs only $4.95. Although the medium element did fit on the vase, I liked the way the smaller one looked better because you could see the green branches better.
Posted by Allison at 12:16 PM 3 comments

I've got two promotions to share with you that start today. 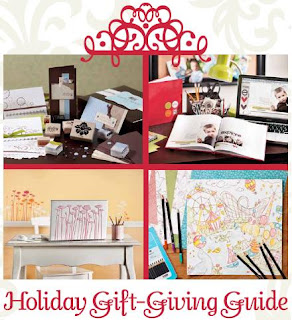 Stampin' Up! always has a lot of promotions every year at Christmas to make gift-giving for the crafter on your list easier - the Holiday Gift Giving Guide is one of them! It breaks down Stampin' Up! products into various categories for every type of crafter on your list! Starting today and going until January 4, 2010, for every $65 you spend on items on the gift-giving guide you receive a free Decor Elements piece (valued up to $22.95).

I am also offering a second promotion for my customers only throughout the months of November and December! If you spend $100 or more on Stampin' Up! products, I will give you 10% off your purchase!
Posted by Allison at 9:22 AM 0 comments