I'm back to posting randomly after having last week off and having tons of time to stamp. Plus to top it off, I'm on night shifts so my photos aren't great because the sun is already gone by the time I wake up!

Here is a card using the colour challenge here as part of RDOA. I also combined this weeks sketch challenge, SC201, on SCS for inspiration for the layout. I had this card in my mind for a while but it didn't turn out quite like I hoped - I think because I didn't want to cut down the main image but I had pictured it smaller than it is. Oh well. 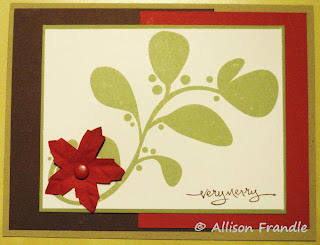 Here is another card I used just to see how it looked with the other stamp from this organic outlines set. I know lots of people don't really like this set, but as soon as I saw it I had to have it (even though I've hardly used it)! I like the first card better. 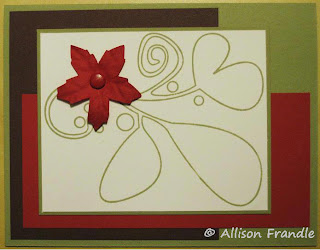 If only I didn't see this cards in real life, I could blame not liking them on the poor photograph. Unless you have a stamping blog as well, you wouldn't believe how much of a difference it really makes having natural light!

I like them both! And I agree with you about the light! Makes a world of difference!

These are simply beautiful! LOVE those colors!

both pretty I really like the one with the filled in image! :)

Love them both! Great colours and awesome take on the sketch challenge!

Have a wonderful weekend, Jennifer :)

they are beautiful! love the red flower with those colors! Great cards!